Story and photos by Amber Heintzberger
Jennie Brannigan has been riding since she was a kid. But it was as a Young Rider with a talented gray, Cooper, that she purchased as a four-year-old from Kelli Temple, that Jennie first found success. It was with Cooper that Jennie first experienced competing at the International level and began making headlines for her riding. And it was with Cooper that she began working for Phillip Dutton, eventually becoming his assistant before striking out on her own to develop a successful business riding and competing.
Cooper’s death after a freak accident at the 2009 Fair Hill CCI3* would have brought many riders to their knees. He injured a tendon after slipping on the show jumping phase but died after complications from surgery. After Jennie mourned his death, she came back fighting.

Now the CCI4* rider operates her own business out of West Grove, Penn., and Ocala, Fla., and has a string of talented horses across the levels of eventing. This weekend, she won the Preliminary Horse Championship at the American Eventing Championships (AEC), finished third in the Novice Horse Championships, and is leading the top two spots in the Intermediate Championship. She also currently sits in second place in the Advanced championship riding Nina Gardner’s Cambalda. 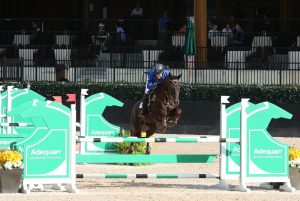 As a successful international rider, Jennie voiced disappointment that she has been encouraged to purchase a made horse – she prefers to bring them up herself, focusing on being the best horsewoman that she can be, not just on finding competitive success.
“It’s been interesting because I’ve gotten horses from quite a few different places, everything from OTTB’s that Tim and Nina Gardner have bred to Beth Battel’s mare Stella Artois, who I found in Germany and fell in love with – she was sourced by Kara Angulo. Basically anything with four legs and a tail, I’ll ride it! I’ll ride something spooky, I’ll ride something strong.
“I want to be able to ride any horse, and for me it’s important to look at every horse and bring out the best in it, not just focusing on improving their weaknesses but rather developing their strengths.”


In 2016 Jennie received the Rebecca Broussard Grant. As a recipient of the award, she promised to dedicate an award in memory of Cooper to promote education for Young Riders.
Jennie is so convinced that riders need to be able to make their own horses, she put her money where her mouth is and established the Connecting Coasts Prize for the top placing two-star Nations Cup Young Rider who is from west of the Mississippi River. The Connecting Coasts Prize allows the winner to stay and train with Jennie in Pennsylvania for up to two weeks to prepare for an event of their choosing on the East Coast. This award includes room and board for the rider, a stall for one horse, and training with Jennie.
“You see kids with strings of horses and I think it’s important to remember whatever you’re sitting on you still have a chance,” she said. “I know what some of those horses competing at Burghley started out like,” she said. “I know what Steady Eddie looked like the day he stepped off the plane – you wouldn’t even look at him! 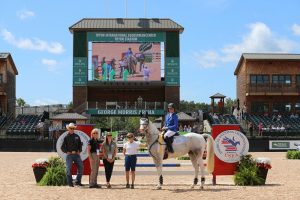 “I’ve had pressure to buy made horses but not once did (someone) ask what was in my barn and it makes me really upset that the emphasis is on buying made horses rather than developing them. I’ve been holding my tongue and I just keep showing up, but I don’t like that the emphasis isn’t on being a good horseman. I think people need to make the horse that they have the best it can be. I have lovely, talented horses but not one of them costs six figures, and you don’t have to have that to succeed. Leslie Law’s here producing his own horses, and I feel like those are the partnerships you see having the most success.”
Jennie has worked hard to achieve her success and she is grateful for the opportunities that have come her way.
“Obviously Cooper was a special horse to me; my grandfather supported that because he thought I was serious about horses at that point, not just messing around with horses in the backyard, and that took me from being a nobody to being on a training list and probably got me my job with Phillip. I remember when I first moved out here from California being in the warmup with Karen O’Connor and people like that and being really intimidated. To me, the Coast to Coast prize is a good way to try to grow on what the Broussard grant meant to me and help people coming from west coast be successful when they come out here.”
Just last weekend, Jennie competed in Ireland after receiving the Connaught Grant.
“Now there some pressure to take her to Kentucky next spring and get a shot at the 2018 World Equestrian Games,” Jennie said, “but I’ll do the right thing by my horse. I’d love to ride for the team in the future, but my philosophy is to do right by the horses. They always come first, so we’ll see how things go.”