Grooms of WEG: Kendyl Tracy and Donner, Presented by Wahl

Have you ever walked through the halls of your high school with tears streaming down your face, but you didn’t know why?
Imagine all the noise around you — classmates talking and laughing as they shove by on the way to their lockers, the droning sound of the morning announcements coming through on the overhead speakers, the bell echoing in the concrete courtyard, signalling the start of first period.
It makes you dizzy. Your brain feels like it’s rattling around in your skull. The tears keep coming and you just don’t know why. All you feel is, well, nothing.
This was Sarah Griffin’s existence for the latter half of high school and even now, as she wraps up her bachelor’s degree at Clemson University. It stemmed from one concussion, and then was exasperated by a second one.
“Other people couldn’t help me. I couldn’t help me. I just had to kind of ride it out until my body became exhausted and I couldn’t keep it up,” she said. “I missed a lot of school because of this.”
Sarah’s life would ultimately change forever.
Heels Down Mag is exploring the stories of equestrian athletes who’ve suffered from concussions, and the short and long term effects of the injury on their health and performance. This is the second story in an ongoing series.

Read this next: One Blow to the Head Can Last a Lifetime

It started off as an average riding lesson. Sarah, a freshman in high school near Charleston, S.C., was schooling a few 2’6” jumps on a lesson horse with her hunter/jumper trainer. The girth wasn’t cinched tightly enough, and as Sarah cantered around the course, her saddle slipped down the horse’s barrel and she landed in the dirt, head first.
“I felt dizzy right away, but I jumped right up,” Sarah recalls. “I jumped right up after the fall but then I fell right back down.”
Sarah’s trainer told her not to get back on. So instead, she went home feeling disoriented and sore. She concluded that there was a good chance she had a concussion, so her parents monitored her all night after the accident, and kept waking her up so she didn’t sleep too much with a possible head injury.
While Sarah says she didn’t suffer any memory loss, her friends noticed right away how she kept repeating herself. It wasn’t until she was in the car with friends on the way to school the next day that the ill effects began to set in.
“I remember everyone was talking at a normal volume, but to me it felt like they were screaming,” she said.
Once she got to school, it got even worse.
“I just couldn’t handle people. My brain just hurt and I started to cry, but I didn’t know why,” Sarah said.
This would spark a decade of doctors visits, panic attacks and fatigue for the amateur hunter rider. After her first concussion, an MRI would reveal that Sarah actually had a dent in her head where the muscle warped from the impact of the fall.
A second concussion three years later, where Sarah slipped off the back of a horse while jumping without stirrups, would only infuriate the symptoms of her first.
“I’m an excellent example of second impact syndrome,” said Sarah, who is now 25.
Second impact syndrome is a medical term used to describe how the brain swells rapidly, and often catastrophically, when a person suffers a second concussion before symptoms from an earlier one have subsided. The second blow to the head could occur days, weeks, or in Sarah’s case, years after the first, and even the mildest concussion can lead to irreparable harm from second impact syndrome. 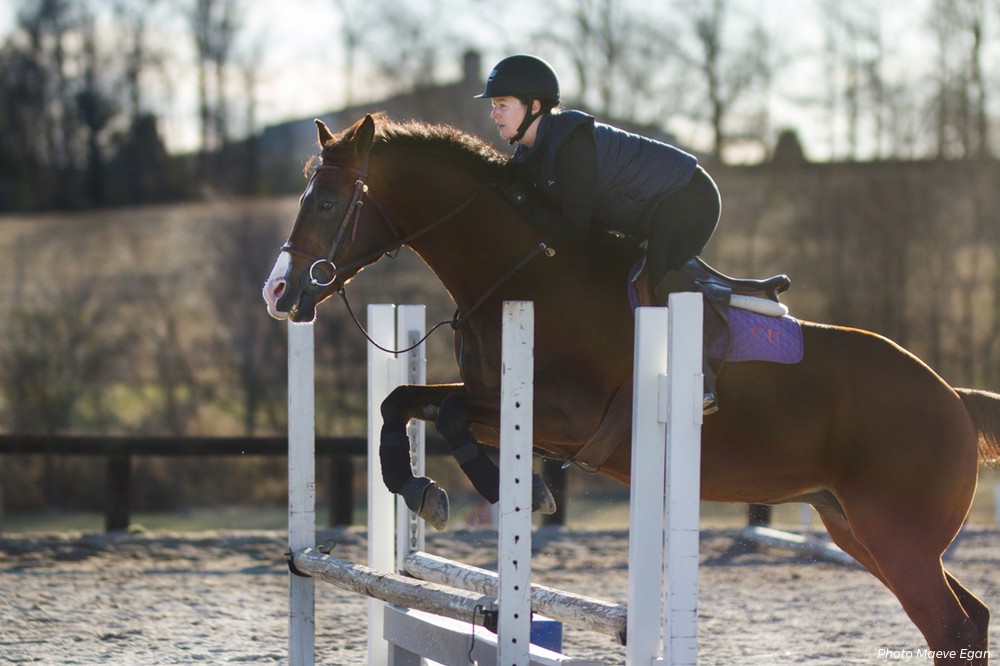 Sarah described her first concussion as being more painful in the short term, and the second as having much more long-term effects. After the second injury, she became more prone to panic attacks. She felt exhausted all the time, which made it hard to keep up with regular riding and school.
“Even little things could send me into a panic attack, things that were seemingly insignificant to other people. And when I wasn’t having panic attacks I was worrying about having panic attacks and just worrying about everything in general,” Sarah said.
For more than a year, she experienced a “floating feeling” and issues with physical depth perception that would throw off her equilibrium. It gets worse when she is high off the ground, in an airplane, or even when she’s sitting in the backseat of a car. This is a problem she never had before her concussions.

Like this article? Try: Depression Among Equestrian Athletes Is Very Common But Still Taboo

“I would have to push down on the floor hard with my hands or my feet to sort of ground myself,” she described. “If I was moving and stopped, I would still feel like I was moving.”
Eventually Sarah would come to be labeled with chronic fatigue and fibromyalsia, which stemmed from her head injuries. Daily migraines made it hard to do anything but rest. It also made her extremely sensitive to medications, which only made her symptoms that much more difficult to treat.
There were many times when her brother would have to physically carry her upstairs at night to her room because Sarah’s body was so exhausted and in so much pain that she couldn’t do it herself.
“Stairs continue to be the bane of my existence,” she said.
It’s made having a social life as a college student that much harder. Sarah says she’s rarely felt well enough to go out with friends after class. Some medications made her gain weight for a while. Sarah struggles with maintaining a normal sleep schedule because the changes to her body.
Sarah’s come to accept that this is just the way she is now, migraines, fatigue and all.

Tips On How To Back Up That Trailer Like A Pro

Even little things could send me into a panic attack, things that were seemingly insignificant to other people.

“I’m up front with my teachers about it. Most of my friends know, but I pretty much have no social life because I have no time or energy,” she said.
But through the years of sleep studies, MRIs and dozens of doctors’ evaluations and tests, Sarah never let her fatigue or the headaches keep her from the barn.
“Horses helped ground me. I didn’t usually have panic attacks at the barn, it was my happy place,” said Sarah, who is studying equine science and business at Clemson.
She hopes to find a full-time job in the horse industry in South Carolina after graduation. Sarah’s spent weeks photographing herds of wild horses out West, never letting her injury get in the way of her passion. She soon may be purchasing a horse she watched be born and raised through her university program, too.
“I’m a big advocate for always wearing a helmet whenever you ride, no matter what discipline,” she says. “I was wearing a very good helmet both times. I always tell people, ‘It doesn’t matter what type of saddle you get bucked out of, you’re going to hit the ground just as hard.’”

When Tragedy Strikes: Don’t Ignore Your Own Warning Signs

One Blow to the Head Can Last a Lifetime