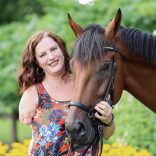 Lifelong Equestrian who started in Hunt Seat, but now focuses…

Are Supplements A Scam? Maybe.

It isn’t unusual these days, unfortunately, for so many of us to experience bullying. The horse world is extremely competitive, and along with that comes cattiness, backstabbing, and trash talking. Maybe we are all guilty of it. I know I certainly am.

But is there a better way?

As a child, I was bullied pretty badly. I went to a small school and I rode Hunt Seat. Both are notorious for this behavior, but let’s be honest, on top of being an amputee, I was extremely socially awkward, hated to shower, and sucked my thumb until I was 11. I wasn’t exactly “popular” material. I tried as best as I could to blend in with the background, and to not be a target for whomever was trying to prove something on any given day.

I used to fight fire with fire. I tried to defend myself. I would gossip about the bully. But two wrongs don’t make a right. They cause an explosion.

We can do better

It wasn’t until I was in my 30s that I decided I could do better. My parents had moved out of town and that left me, an only child, all alone. In owning my own business, I have the benefit of being able to work from anywhere in New York. So, I packed up myself and my horses and moved closer to two of my closest friends.

” Imagine what horse showing would be like if rather than people’s faults, we concentrated on their strengths.”

We rented a farm there, rather than boarding at a facility, so we had a say who came in and who did not. We sought out like-minded people: women who just wanted a strong barn family and a good solid foundation to rely on. We sought out a trainer who made positivity a priority.

Rather than just blue ribbons, we celebrated every small victory. A canter depart without bucks. A correct lead. Getting over a fence taller than a cross rail. We focused on the positives of our rides first.

We changed our perceptions.

The Gait You Often Overlook: The Walk, Presented By Arena Saddles

In changing an internal perception, we shifted our perceptions of others. As a group we sought out new people at shows that were alone or new. We congratulated them on their rides. We invited them over for a glass of wine. It became easier and easier to encourage each other and strangers, and it affected everyone around us in such a positive way.

Imagine what horse showing would be like if rather than people’s faults, we concentrated on their strengths. Rather than picking apart a competitor’s ride and comparing it to our own, what if we simply congratulated each other on a job well done? That she stayed in the arena, that she stayed on, that she had a beautiful ride? Let’s celebrate this hobby we love so much and those that enjoy it with us.

So, next time you’re at the barn or at a show, congratulate someone. Anyone. If you see someone have a really tough ride, tell them about the good parts of it. Tell your barnmates how well they did. Help them pick out the best three parts of their ride.

After all, when women empower women, there is no limit to what we can accomplish! 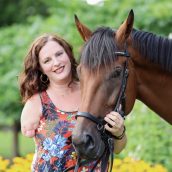 Lifelong Equestrian who started in Hunt Seat, but now focuses on Dressage and Eventing. OTTBs are her passion, retraining them and volunteering in rehoming efforts. Sarah subscribes to a movement, Lift Your Sister, because “when women support women, there is no limit to what we can achieve”.