Home » Taboo Topic: Riding While On Your Period 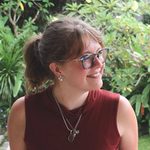 Every woman remembers the first time they got their period. Mine was while I was at a horse show. A horse show in which I had to wear white breeches all weekend.
I recall sitting in a sticky outhouse, staring perplexedly at a tampon applicator. I didn’t have a cell phone to call my mom, and was scared to tell my coach about it. The other girls there with me were all younger, so even though they couldn’t relate or give me advice, they were all on “white breeches watch” because I had no idea “how long tampons lasted”. The result was very frequent trips to the outhouse to “check”.
That season, my competition schedule just happened to coincide with the worst time of the month, like clockwork. And so the “period learning curve” in which menstruating is scary (instead of annoying) was extra horrifying.
Stained… Saddles
When I was 14, I saved up a mountain of babysitting money to buy a dressage saddle. It was a beautiful two-toned Stubben that I still own. A scarce few months after I proudly brought it home, I got my period in the middle of a trail ride. You can guess what happened to the light brown seat. I was mortified. No amount of scrubbing was going to get that stain out. It’s one thing to throw out a pair of underwear,  but a $1,000 saddle? What was I supposed to do?

I avoided letting anyone ride in or borrow that saddle, and kept it covered anytime it wasn’t on my horse. My prized possession turned into an embarrassment. Over the years, however, I started noticing other saddles that had been afflicted by the same problem. There was a sort of unspoken agreement between women that it was just something that happens sometimes.
Tampons (or lack thereof)
At least I had “learned my lesson” on my own saddle and not someone else’s. A decade later, I’m still very anxious about riding in other people’s saddles during that time of the month, which can be unavoidable, as I’ve been catch riding horses for the last three years. Last summer, I was out on a 10-kilometer fitness ride on a big, green-ish gelding. Around kilometer five, my tampon fell out.
I let loose a string of profanities, cursing my impractical gender and running through solutions in my head, while the poor horse’s ears swiveled back and forth in sympathy and confusion. The trail was empty at the moment, but not desolate enough to be able to stick my hand down my pants without traumatizing whoever might turn around the corner and see me. The nearest outhouse was a few kilometers off, and even then, this horse wasn’t really the kind who could be tied to a branch. Hiding in the bushes was also out, as I imagined being dragged off by the reins with my breeches around my ankles.
I looked at my hands. They were totally covered in icky grime from the vigorous forehead scratch I had given the horse prior to getting on. I’m no germophobe, but I really didn’t want all that filth anywhere near my nether regions. I sighed and rode the last five kilometers in a two-point. Fitness ride, indeed.
[et_bloom_inline optin_id=”optin_4″] Do period panties work?
When I got home, my burning quads mixed in with cramps and a mood swing to create a fury unlike any other. Teeth gritted, I went online and ordered a pair of Thinx panties, that advertised themselves as “period proof underwear”. I crossed my arms and humphed. Now I was sore, crampy, grumpy and also down $40 for a pair of ugly granny panties.
Oh, but do those things ever work. It’s like a weird menstrual magic. My then-boyfriend walked into my apartment one day to find me dancing around in my underwear, laughing. “I’m having my period right now!” I squealed. “No tampon! No pad! I don’t know where it all goes!” I saw his eyes widen a little, nodding in cautious support. Pro tip: never feel ashamed to talk to men about periods. I felt jubilant – like I was cheating an unfair biological system.
The month after, I went on the same trail ride with the same horse, in my new favorite underwear. At that fateful five-kilometer point, I held my fist aloft in triumph, like I was on a time-of-the-month victory gallop. Take that, Mother Nature.
Periods are gross. And while I complain, there are women I know who have it even worse than me. Debilitating cramps, periods that last ten days, and loss of blood in quantities that have adverse health effects. These are horrible for “normal” women, without adding in mandatory pale-colored tight pants and “seats” that cost thousands of dollars – not to mention that the body position required for our sport is not exactly conducive to keeping tampons in place.
My point is that for every scared trip to the bathroom at a show and every sitting trot you’ve had to ride while cramping like mad, you’re not alone. And as I type this article, knowing full well it will be read by thousands, I can definitely say this: there’s nothing wrong with talking about it.