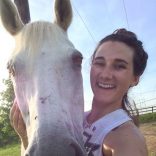 “I told them we’d be providing pony rides this year for the Fall Festival,” my mom’s voice chimed from the front seat.
I immediately choked on my coffee.
My parents and I were headed to a funeral at the Arlington National Cemetery and right before we arrived, mom dropped the news.
I snapped my eyes shut for a moment, seeking composure.
“Mom, I wish you had talked to me before committing us to pony rides. We don’t have enough horses.” I strained to curb the anger rising in my voice. Though she was the one who signed us up, I was the one who would have to coordinate all the logistics, from the handlers to the tack to the signs.
“Lydia, we didn’t have the rides last year and even if I have to just use Sophie and Smoky, I am going to give the pony rides.” She had turned around in her seat to face me, and the “little girl about to be in trouble” sensation began to set in.
My dad eased the car into the entrance gate. An armed guard approached our van. Dad stretched out his hand as though quieting a crowd.
“Now is not the time. Can we discuss this later?”
It was an order more than a question, but he was right, and we ceased the oncoming row. Though if mom and I had argued to the death we were at least in a prime location for a burial.

The local church Fall Festival is held every year at my parent’s farm. On average we have 500 people show up, most of them kids and the majority of those kids want pony rides. It is always a fun way to ring in autumn. Though for the poor souls involved in running it, both equine and human, it is a long two hours of smiling and walking.

It’s safe to say that the majority of us have had a pony ride in our lifetime, but have you ever hosted a pony ride? No? Then let’s put it this way: I’d rather ride a chestnut mare while she is in heat through a llama show. First, you have to find enough horses for 500 people. Second, you have to find at least five handlers who have preferably third grade knowledge (though we’ll take first grade knowledge) of horses. Third, you have to get all handlers and horses to behave while 500 kids in costumes clamber on their backs. Things that would be nice to include: liability waivers, a flask of something strong, kids who don’t scream, and moms who don’t take 1,000 photos.
Since we had already committed to doing pony rides, I set out to find more horses to supplement the three that I own. Thankfully my friend Jared who runs a training barn came to the rescue and sacrificed… I mean, lent us… two of his lesson horses. My team was comprised of the following equine members:

Heels Down Holiday Gift Guide: For The Serious Competitor

– Smoky, a 27-year-old Welsh pony whose spirit human is an ornery, tobacco-spitting old man.
– Sophie, a 19-year-old Quarter Horse worth her weight in gold who happened to split her eyelid open the week before and was covered in stitches (*cue all the kid questions).
– Copper, a 17-year-old OTTB who had no history of giving pony rides, but beggars can’t be choosers so he was assigned to the front line.
– Georgia, a 12-year-old Quarter Horse who thinks any time not spent grazing is a waste of time.
– Tigger, a 10-year-old Quarter Horse who is the embodiment of an equine saint unless you wish to catch him in the field.

I used the term “pony ride” loosely, considering only one of the members technically fit into that category.
The day before the festival, some members of our church came to help set up. They rented a bouncy house and were going to place it next to the riding ring. I laughed and said, “NO”. Unless they wanted pony catapults with kids being projectiled every minute. They moved it to the other side of the barn.
For all the headaches, it was a success. Our horses were champs and earned their oats yet again. My crew rallied for the two-hour walking period and we didn’t have any spills or thrills, even with the fruit launch 10 yards away. What does make the pony rides worth the effort is when the answer to your question of “is this your first time riding a horse?” is “yes!” and is accompanied by a huge grin.