Heels Down Magazine presents the Heels Down Happy Hour podcast. There’s a whole lot of stuff happening in the horse world, and someone’s got to keep you up to date. Who’s winning what? What weird rules are you probably going to violate at your next horse show? What does your favorite rider really think about white breeches? Don’t worry, that’s what we’re here for. Grab a drink. Welcome to Happy Hour.
We’re kicking off 2018 with controversy, from rollkur to toilets in Tokyo. In our first episode of the new year we celebrate the arrival of Payne baby Hudson, revisit our worst horse show nightmares and discuss when is it too cold to ride your horse. Thanks for tuning in…

Stream Episode 14 here.
Tune in for new episodes the 2nd and last Friday of each month on the Horse Radio Network. Download new episodes on iTunes, Google Play, and Stitcher. 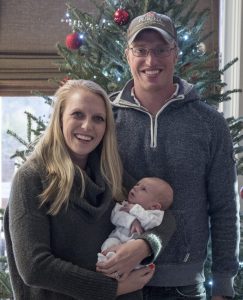 Jess is taking some time off to enjoy being a first-time mom, so we have a very special guest filling in this week.

Eiren Crawford is a Grand Prix dressage rider and clinician. She began her career as a working student for Lars Petersen, moved to Germany in 2008 to work for Olympic Gold Medalist Ingrid Klimke, where she assisted in the development and training of both dressage and three-day event horses. Alongside Ingrid, Eiren developed a commitment to conditioning the whole equine athlete, using cavaletti and other cross-training techniques to bring out the best in her dressage horses. She now runs her own business All Points Dressage in Maryland and Florida.

Enjoy this Hudson Bay martini in honor of baby Hudson’s arrival!  | @Absolut
Alcohol and weed (well, CBD oil)  are no longer banned substances, says the FEI.  | @Dressage-News
Japan is updating their “squat” toilets to Western ones before Tokyo 2020.  | @BBC
The Wellington Eventing Showcase is unfortunately no more. Boo. | @Eventing_Nation
Rollkur is making waves on social media again. We discuss.  | @HeelsDownMag
Caroline reviews the In Horses We Trust Reins, which apparently won’t melt even when you light them on fire. | @IHWT

Caroline Culbertson is a 27-year-old equestrian journalist who broke her foot “surfing” a mattress down the stairs at age 7. Yes, her parents told her not to. She grew up in the south y’all and graduated from Duke University in North Carolina. She also picked up powerlifting a few months after breaking both bones in her arm, so her judgement is questionable. Hence, she’s an event rider.

Justine Griffin is an award winning 29-year-old journalist who has written about everything from horses to high profile CEOs to her ovaries. (She donated her eggs once.) Two things she loves the most? Whippet puppies and cheese. Justine is a firm believer in unicorns and feminism. So take everything she says with a grain of salt.

Episode 14 is presented by Ecogold, leader in saddle pad innovation. Known for their non-slip, shock-absorbing saddle pads, half pads and protective horse boots. Trusted by Olympians. Visit www.ecogold.ca
Download the Heels Down Magazine app in the iTunes AppStore: http://apple.co/1QicprS or Google Play for Android phones and tablets: http://bit.ly/1sXQV75.