Developing a young horse to the top level of any discipline is no easy feat. For professional show jumper Andrew Welles, it’s a science he’s still perfecting, but he says it comes down to knowing when to believe in a horse and bringing them to their fullest potential.
Andrew, who grew up in Minnesota before moving to Wellington at 16, has produced several horses to the upper levels of the jumper ring. Having worked for Missy Clark and Chris Kappler as a junior, Andrew secured several international grand prix starts, including two stints as a member of Nations Cup teams in Austria and Portugal. At age 22, Andrew struck out on his own, starting his own business of training and teaching.
“Through coming up the junior ranks to becoming a professional and also helping students with their horses, I’ve been able to experience a lot of younger or green horses,” said Andrew, now 30, of Wellington, Fla. “I don’t think we’ve perfected the process, but I think the beautiful thing about horses is every time you interact with them, you learn something new. I think even Ian Millar, at (70 years old), would say he learns something from every horse he rides. Young horses teach you as much as you are teaching them.”
For long-term success, it’s important to resist the urge to push young horses too fast.
“I think a lot of people lose sight of the fact that, at the end of the day, if the horse is going to be a top grand prix horse, it doesn’t need to be jumping 1.60 meters until the mid-way point of its nine-year-old year,” said Andrew. “With some horses, it even takes until their 10- or 11-year-old year to get to that point, especially with how intricate and technical the courses are now.”
Expecting a horse to stick to a predetermined schedule will almost never work, Andrew stresses, but having a guideline is instrumental in effective development.
Four- and Five-Year Old Horses
Since most horses will not reach the 1.60m grand prix level until at least nine years old, four- and five-year-old horses in Andrew’s program will not be jumping large fences or technical courses. Instead, the focus will be on gaining life experience and taking breaks. 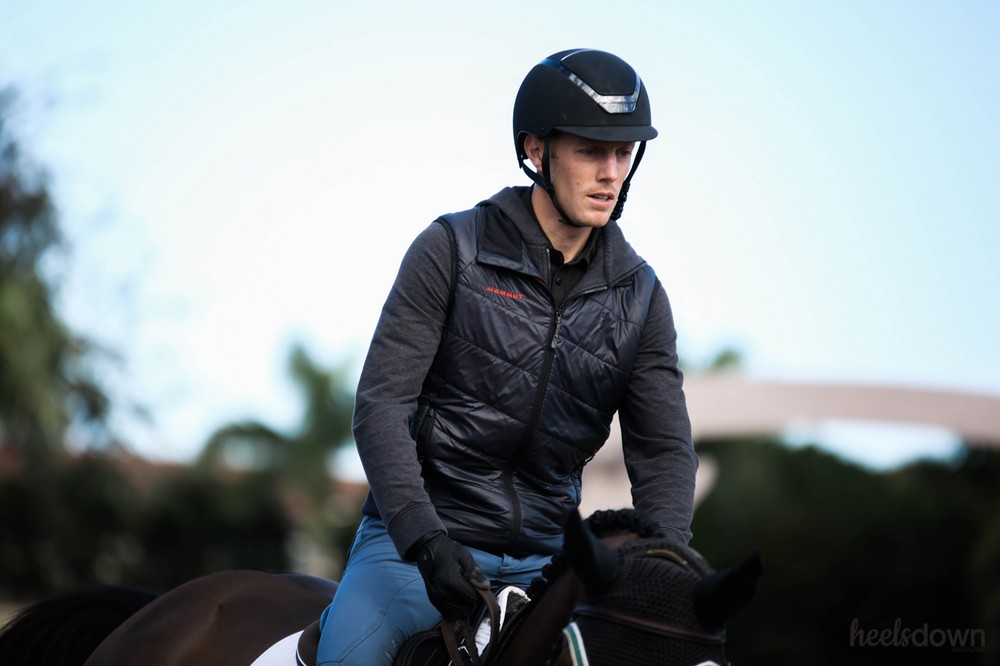 “I think it’s important for the really young horses to work in chunks of time, followed by a period where they can recharge and be horses,” he said. “I’ll do a short spring and a short fall season of training – not a lot of, if any, showing – and then give them time off in the summer and winter.”
Andrew also focuses on going on hacks, riding on different surfaces such as grass and sand, and going to shows but not competing. Andrew introduces new types of jumps like oxers and related distances as the horse progresses, but keeps things simple to start.
“A horse should learn rhythm first, so you want to slowly start introducing simple courses,” he explained. “A simple hunter course of outside, diagonal, outside is great for a young horse to learn their job.”

Young horses teach you as much as you are teaching them.

As a rule of thumb, Andrew wants his five-year-olds to finish their year jumping 1.20m fences, but he is careful to let his horses dictate their pace and workload. In the interest of soundness – both physical and mental – he won’t jump them more than once or twice a week.
For five-year-olds, there are Young Jumper Championships to start thinking about.
“I think this is a good system, but I do think it’s a bit of a catch-22 because it is ok for a horse to make a mistake,” Andrew said. “On the business side of the sport, sellers are very focused on the percentage of clear rounds – and I am the same way as a buyer. But I don’t think you should be so focused on perfection this early in the game.
“You want the horse to learn from its mistakes; it’s a part of how they get to understand what we’re asking of them,” he continued. “So the (Young Jumper) Championships are a great goal, but sometimes the horses will feed off of the pressure you’re feeling and lose a bit of confidence.”
Six- and Seven-Year-Old Horses
As the horse begins to really understand the objective of the sport – leaving the rails up in a timely fashion – the rider can start to ask more. A seven-year-old horse that Andrew has expectations of being a true grand prix horse should be finishing out the year jumping 1.40m classes. Again, this is a guideline and not an end all, be all goal. 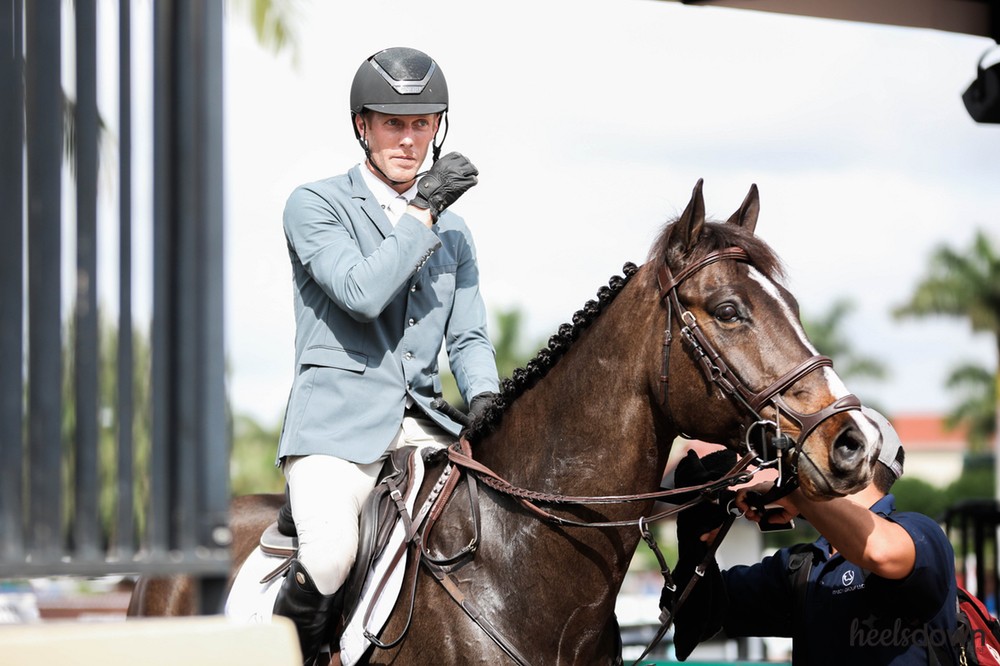 What about introducing speed?
“Different riders have different philosophies on speed,” Andrew said. “Especially if they are going to be a grand prix horse, you don’t want to run their legs off when they’re young.”
More often than not, he will start introducing the horse to tighter inside turns, teaching them how to be efficient, which translates to seconds off the clock.
“I think that maybe one in every five or six classes, you can start to push them a bit against the clock,” Andrew said. “I don’t think you necessarily need to ride for results on a six-year-old, but at the end of the day they need to learn how to go fast and leave the jumps up. It’s a fine line between not doing it at all and overdoing it. You want to teach it to them enough so that when it does come time to jump-off in a big class, they aren’t in over their head.”
The Intangible Effect
In choosing a prospect, horses that are easier on their bodies due to good conformation will have a better start on the road to success. But, of course, conformation only goes so far without other key ingredients: the right mind, athletic ability and talent.

I don’t think you should be so focused on perfection this early in the game.

The Goals That Weren’t

Andrew also emphasizes the intangibles that you can best feel when you have developed a connection with a horse.
“You learn a lot about a horse’s character when you work with them as a young horse,” he said. “When you can truly feel that the horse wants this as much as you do, and that’s something you can’t replace with ability or conformation. I’d say I’ve been around maybe 10 or 15 horses like that in my life, and those are truly the one-in-a-million horses. Those intangibles, the things you pick up on when you know the horse, can tell you a lot about how far they’re going to go.”
‘Cookie Cutter’ Plans
Andrew acknowledges that it’s easy to feel you’re missing deadlines if your horse hasn’t reached a certain level by a certain age. He advises riders not to feel frustrated, but rather to let their horses tell them the pace at which they can progress.
“All of these guidelines I’ve spoken about are relative. That is probably your ‘cookie cutter plan’,” he said. “The horses will tell you where they are, and I really think patience pays off. One of my best horses didn’t jump bigger than 1.35m until the end of his nine-year-old year. You’re not behind if you don’t meet the benchmark; everything goes at its own pace and that is important to remember.”