Should My Trainer Ride My Horse During a Lesson?

What should a young dressage prospect be working on in his three-, four-, and five-year-old years to springboard a long, successful career? Canadian grand prix dressage rider and head trainer of All Points Dressage in Maryland, Eiren Crawford, explains how young horses should progress through these formative years.
Age: Three
A three year old should be ridden only a few (3-4) times a week and then with lots of breaks. I always do a couple weeks (of work), then give them a couple weeks off. Or do a couple weeks of work, then give them a couple months off. Three-year-olds should really just be getting started, getting to know what a rider is, and then having lots of breaks so they have fun.
I do think a three-year-old should know how to go into the contact. I don’t believe in just letting them go around with no contact – why not teach them that when they’re three? Why wait until they’re older and it’s harder? But (don’t ask) hard questions, just make it fun and they have to go forward, they have to get outside, they just have to be horses. It doesn’t have to be specific whether they’re going to be jumpers or dressage horses.
My young horse who is now seven – when he was three, he had 60 days (of training) and then he went back out in a field for five months. Then at Christmas we pulled him in just because I was visiting, I rode him for three days, then he went back out until the spring of his four-year-old year. And he’s fine! I think the less you do with a three-year-old the better, but make (the time you spend in the saddle) matter.
I’m not really a big fan of (showing three-year-olds), but if you’re going to do it, something like a normal materiale class or under saddle class where they’re in there with a group can be fun for young horses. It gives them confidence to be in a scary environment with all their friends. I think the in-hand classes are interesting for the horses too. A lot of these horses have gone through that program and they can handle the show atmosphere really well.
Age: Four
I’d start bringing them into a more regular program, still making it interesting and fun. I’d be doing about five days a week of work, but that depends on the horse. The four-year-old I have now, he’s grown so much since I got him in January and he’s changed so much in his body that we’ve had to tailor the training for him. So I can’t say, “I’m going to ride this many days and train for this,” because some days you pull him out and look at him and he’s changed so much in his body that the work is not easy. So then, we go out and do a lot of walking on the hills. And then when his body (balances out), we’ll try to teach him some dressage stuff.

I don’t believe in just letting them go around with no contact – why not teach them that when they’re three? Why wait until they’re older and it’s harder?

But it’s the same as the three-year-olds: keep it fun and forward, do as much cross-training as you know how to do. Keep them happy to work – that’s the most important thing.
My horse did really well in the materiale classes because it’s easy, you don’t have to worry about accuracy, and you just go have fun. The four-year-old test is not that hard for some horses, for others go do a training level test.
If they are good and they enjoy it and they’re happy, go to (shows), but it really depends on what your goals are. I just want to know the horses will behave themselves but some people want to qualify for things, so then you have to do as many shows as it takes to get your marks. If a horse is really bad at a show, I’d go to a lot of shows. If they’re good, I don’t think they have to keep proving themselves.
Age: Five
Five-year-olds start to work harder, but they are still growing and developing. Again, it depends on the horse, but as a generalization they should know sitting trot, they should go forward and back in their paces, and you can start touching the ideas of collection with them now that you’ve been riding them forward for two years already. They should be fit, they should be in a program, and I’m really a believer that the program should be one that they can stay sound in. 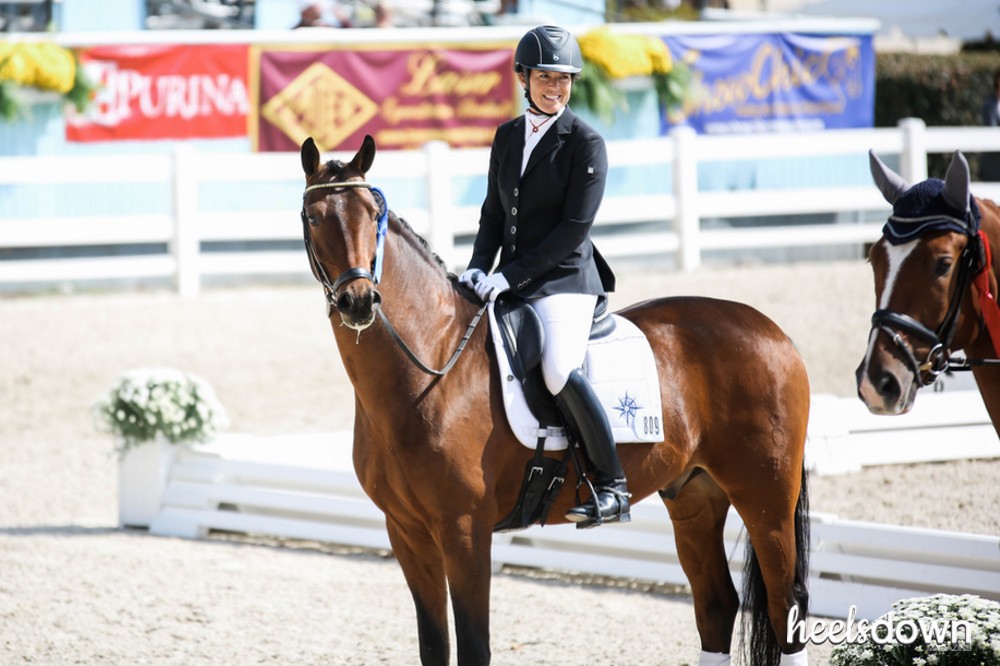 Once they start getting up in the levels, if you’re going to work them, mean it and then give them breaks, so that it’s not too hard but they’re healthy.
Red Flags Along the Way
I think you can see it under saddle (if they’re getting pushed too fast). Some horses go around and their ears are flat and tails are swishing and they’re just not happy in the work. And other horses, they enjoy it and you can see it. Other things to look out for: bad contact, horses that kick at the leg, rearing, stopping, going backwards, sour expressions. You can also tell in their body condition – some horses start to look really thin and sullen.
Every horse goes through moments where they’re like, ‘Wait, this is hard!’ and it’s not always ears forward and happy horses. Sometimes they’re teenagers that don’t want to clean their rooms and you have to say, ‘No, that’s not OK,’ and then you go forward. But as long as the rewards outweigh the discipline, they should stay happy.

Download the Heels Down Magazine app in the iTunes AppStore: http://apple.co/1QicprS or Google Play for Android phones and tablets: http://bit.ly/1sXQV75. Subscribe for a year and get two months free!