Daniel Bluman's Turning Point: "My grandfather was a survivor of Auschwitz and Dachau."

This article first appeared in the October 2016 issue of Heels Down Magazine. For stories worth reading, subscribe now.
Ayden Uhlir is the first equestrian to ink a sponsorship deal with Nike. She’s also the first rider to receive a grant from the Women’s Sport Foundation, which includes a one-year sponsorship with Gatorade, ESPN News, and additional exposure from the various partners of the Women’s Sport Foundation. Receiving this grant places Ayden among the likes of Vanessa Williams, Gabby Douglas, Nastia Luikin and other impressive athletes who have received similar grants from the Foundation.
Originally from Arlington, Texas, the 22-year-old dressage rider made the move to Southern California to become a working student for Christine Traurig, the USEF Developing Horse coach. During her time with Traurig, Ayden competed her 17-year-old KWPN bay gelding, Sjapoer, in the U25 division, with several top placings. Ayden and Sjapoer were also part of the first Young Rider team to travel to Europe, where they competed in the Hagen Future Champions Nations Cup, placing 7th in the Big Kur. She has since sold Sjapoer to enable the next chapter of her career. She shared her journey with Heels Down Magazine.

Finding ‘Your Thing’
I am NOT from a horse family. This whole experience from the beginning has been a huge learning curve for me and my family. We joke that my parents bought me a saddle before a horse. We had not a single clue about anything. We went to a trainer near our house because she was a ‘bronze medalist’ and we thought that meant a bronze medal in the Olympics!
I got into horses because I went to a neighbor’s barn and they had this really old horse called Minimum Risk, and I got on him. The family legend is that I turned to my mom and said, “I found my thing, Mom,” and never looked back. I was about five at the time.
I begged for lessons. I cleaned stalls and have worked full days in barns for lessons and riding opportunities every day since I was about ten. My parents made me take lessons and work to prove my commitment for five years until they would buy me a pony of my own. He was a half-Arabian, half-Caspian cross and so stubborn. I wanted to jump but my parents were overprotective and wouldn’t let me jump until I had my first level dressage rider’s patch. So I competed for a few years and then when I had my patch, I did a year of jumping. But by that time I was not into jumping and wanted to go back to dressage. I moved up to a half-Arabian, half-paint horse named Federalea and we did well in the Arabian breed shows. I really made the transition to serious competition when I met Lendon Gray and went to the first Robert Dover Horsemastership week clinic and realized what changes had to be made to really progress in the sport. I guess after that, everything sort of spiraled.
Create Your Own Success
I had to find a way financially to support my riding. My options were working and going the sponsorship road. I looked at the products I was already using and the ones I would use in the future, and I contacted the owners of those companies and asked them to join me in my journey to become an international competitor.
I made a sponsorship book: a storybook about me and my horse [which included] photos of me as a child on a horse, photos from competitions, my goals, and links to articles. I made it with my mom and it took us about a month.
[emaillocker id=”11445″] I sent the book with a handwritten letter tailored to each company saying why I like their products and why they should sponsor me. I mailed the packages because no one gets snail mail anymore! You get an email from someone: click, delete. It’s hard to delete a hard-cover laminated book.
I use Nike products and so did my dad. He was a soccer player, so I was into athletic wear ever since I was born. I googled “CEO Nike” and found out who the CEO was, and mailed my sponsorship book to his attention. He apparently liked my book and it worked its way down to the people in charge. They contacted me two months later and I met with their representative at my barn, where they fell in love with Sjapoer and our story. From there, we were able to work out our sponsorship deal, which made me the first equestrian to be sponsored by Nike. 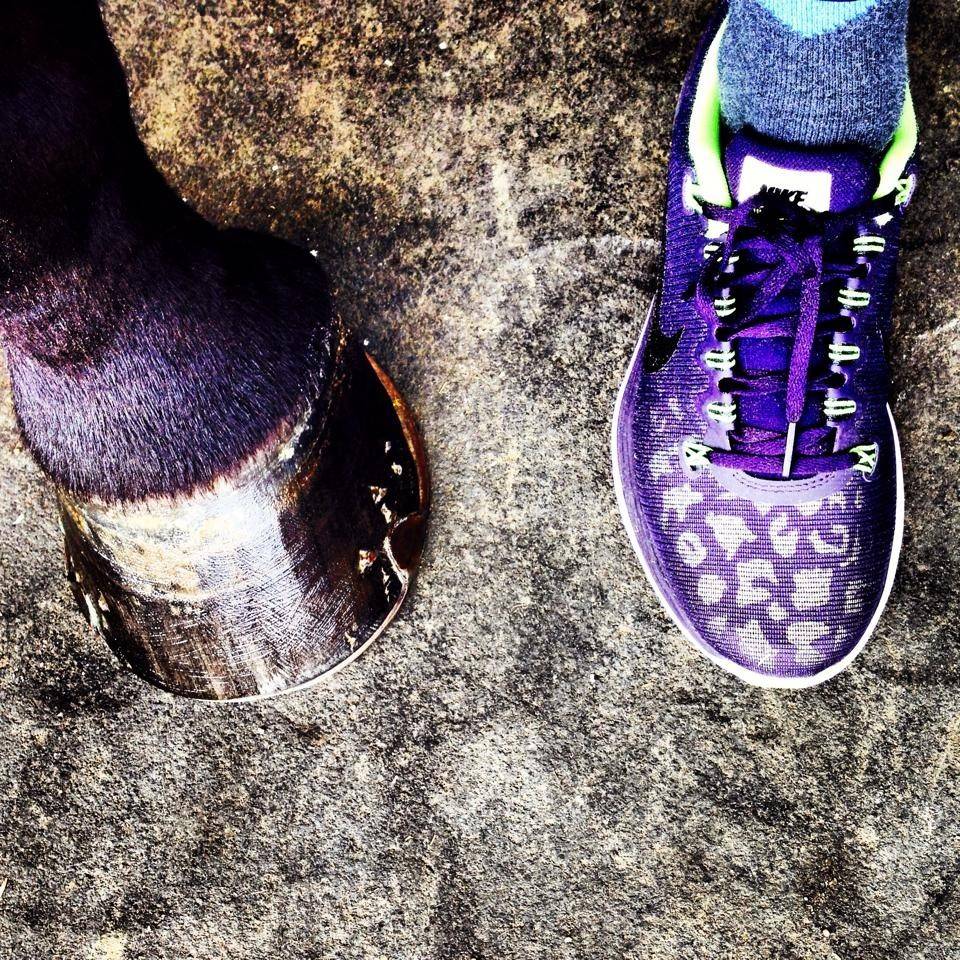 Find The Right Sponsors
I gave a speech at the Dressage4Kids Winter Education Conference about looking for sponsors that share your values and style. For example, if you are a firecracker personality, try spicy Doritos. If you eat Kellogg’s cereal every day, try them. Make a connection. Tell the potential sponsor how their product has helped you before. For example, I wrote to Gatorade in 2012 about how Sjapoer was dehydrated at NAJYRC and the only thing he would drink was Gatorade! [His dehydration] got better in time to win Individual and Freestyle Gold! The President then sent me a very nice email and several huge Gatorade tubs for SJ. So I make contact with people and companies that I feel represent who I am so I can truly represent who they are. I try to be true to those values every day.
I have sponsors that are already in my life. I live in Nike. If there are 168 hours in a week, I am in Nike gear 160 [of those hours]. I travel in it, I go to the movies wearing it, I go on dates wearing Nike. I do my best to be a true representative of the values that Nike represents. I work hard, I give back, and I daily try to promote not only their products but their values. I love their total commitment to creativity, style, function and top performance. I know that sounds a bit corny, but I think that is the commitment you make when someone believes in you and sponsors you.
I had heard about the Women’s Sports Foundation from my agent, Sheryl Shade, and I went on their website and found the grants and applied. I have applied for dozens of grants. Some I get, some I don’t. I went to the USDF Convention on a youth grant. I went to Europe to compete last year because of multiple grants from the Dressage Foundation, Dressage4Kids and KWPN. I have received two Willy Arts Grants. I would give the same advice to any college student. Apply, apply, apply for any clinic, grant, event you can. Every opportunity is a new chance to learn, meet new people and have new adventures.
Leading the Way for Women in Sport
The grant from the Women’s Sports Foundation has several ramifications for me and our sport. I used the money to spend the next six months living and training in Germany with Johann Hinnemann. I also think that this prestigious foundation recognizing our sport really helps to draw more attention to us. I contacted USEF and suggested we apply for a team grant next year [through the Women’s Sport Foundation] for the U25 and Young Rider teams to go to Europe. Heck, we should apply every year.
I hope that equestrian sports can be of assistance to the Women’s Sports Foundation because we are truly the most egalitarian of sports and we can and should be held forth to show that men and women can and should be allowed to compete directly and be paid the same for our achievements. We can be a leader in women’s sports equality.
The Future of Dressage and Equestrian Sports
I hope in ten years (five is a bit hopeful) that dressage becomes what golf or soccer were 20 years ago in the U.S. They were not mainstream sports. When my dad first came to the U.S. in the late 80’s to play pro soccer from Germany, they had a rule in the league that each team had to have two American players because so few Americans played.
I hope that we can all work together to support growth in our industry such as Lendon Gray’s drive to build an awareness of the U.S. youth to dressage. I think having young riders like Laura Graves and Allison Brock on our Olympic team also helps. Like what happened with soccer and golf: if you raise a generation to like and play a sport, even at the rec level, they grow up and continue to follow the sport. They become the mainstream fans. [/emaillocker]

Download the Heels Down Magazine app in the iTunes AppStore: http://apple.co/1QicprS or Google Play for Android phones and tablets: http://bit.ly/1sXQV75. Don’t forget, the first issue for new subscribers is FREE for 30 days!