Don't Miss Out On The Fun of Bloggers Week, Only In the Heels Down Brief

It’s 2019 and you know what that means – New Year’s resolutions. Two special guests will share their tricks and tips on how they stay on track with their goals. A new year also means new rules, and you’ll never guess who beat McLain and Beezie in one year-end contest. Thanks for tuning in.

Kerrigan Gluch has been in the Discover Dressage USEF/USDF Emerging Athlete Program since March 2018 with three horses. She has competed in the North American Youth Championships, where she earned an individual Freestyle bronze medal in 2015 with Vaquero HGF. Gluch competed in the 2016 European Tour for U.S. Young Riders. She has also been successful in the USEF Dressage National Championships in the FEI age divisions yes over the years. She competed overseas as well as a U25 rider in 2018. Gluch is sponsored by Kim Van Kampen and helps ride/train horses at her farms in Florida and Michigan.

Devin Ryan is a talented American show jumper. One of his greatest talents is his ability to assess a young horse and identify its future potential. He is currently developing six horses which he began relationships with at 2 to 4 years of age.  He’s trained and ridden under George Morris, Chris Kappler and Alan Waldman, just to name a few. He was on the American show jumping team that won a team gold medal at the World Equestrian Games. His farm, River Run Stables, is based at Long Valley, N.J.

We’re toasting to Sally and all her new adventures to come with this yummy Pear-Vanilla-Prosecco beverage. | @SP_Foodie

Jess didn’t know what the “52 Thoroughbreds” joke was, even though she’s got the HDHH T-Shirt! Get one of your own. | @HeelsDownMag

It’s a new year, which means there are new rules. We’ve got the low-down on hind boots in show jumping. | @World_Of_Show_Jumping

Are you a tall boot or half-chaps person? Justine reviews the Eliza half chaps from SmartPak, and gives them 2 thumbs up.| @SmartPak

Kerrigan Gluch shares her humid Florida training tips, and talks about her experience as a USEF emerging athlete. | @DiscoverDressage

American Show Jumper Devin Ryan gets deep about winning a WEG gold medal, what his horses do in the off season, and his humble upbringing.| @HeelsDownMag

Mail bag: How can you sell a horse and NOT tell all your friends and family about it? |@HeelsDownMag

Heels Down Happy Hour 70: Burnout Is Real, Even With Horses 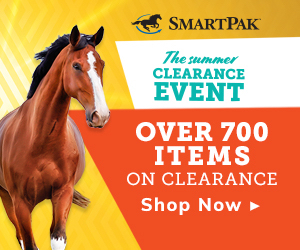