Made in the USA: Meet The American-Bred Horses Competing At WEG

Karen Polle’s favorite thing to talk about is her horse. That should come as no surprise: most equestrians, from hobby enthusiasts to the athletes at the top of the sport, are generally eager to talk about their four-legged partners.
But the way Karen talks about With Wings is different.
“I was really a green rider when I got him, and he was only seven at the time,” Karen recalls. “We started together and came all this way together. His biggest classes have always been my biggest. That’s why this first world championship is so special to me. We’re going to do it together.”
The pair are on their way to Tryon, N.C., this week to compete for the first time at the World Equestrian Games. She’ll be representing Japan aboard “Wingy”, which she fondly calls her favorite bay gelding. What makes this partnership truly special is that Wings, a 15-year-old Dutch Warmblood, is the horse she bought eight years ago to be her junior jumper. Together, they’ve risen the ranks of show jumping, competing and winning all the way to the five-star level in Wellington, Canada and Europe, and are now going to make their world championship debut.

Wings, to me, is the perfect horse. He’s everything you want in a show jumper –  – he’s brave, he’s careful and he’s got all the scope in the world.

It’s a fairy tale come true for Karen, 26, whose social media feeds are chock-full of photos of her and her horses, with captions describing her gratitude and disbelief that she gets to do what she loves every day. While she admits she was drawn to the sport for the sake of competition, Karen says she rides full time now because she just hasn’t found something else she loves as much as horses. 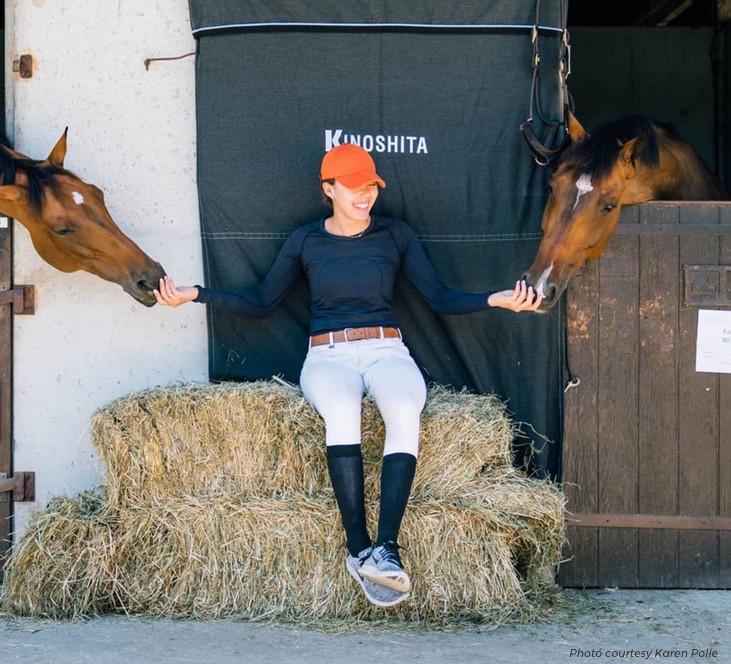 “Wings, to me, is the perfect horse. He’s everything you want in a show jumper – he’s brave, he’s careful and he’s got all the scope in the world. There’s never a jump that’s too big for him,” Karen describes. But his tremendous athletic ability is hardly her favorite thing about him. She says she’s fallen off him more than any other horse. “Many, many more times,” she reiterates with a laugh. “He’s very opinionated. He likes to do things his own way. Now he’s accustomed to being treated a certain way, because he’s always been the king in my barn.”

Everything I’m doing right now, leading up to WEG, is just to keep Wings happy. Because keeping him happy is the most important part of all of this.

It’s clear from the way Karen lights up when asked about With Wings that she’s in it for the horses. Even when asked about her preparation leading up to WEG, she’s more interested in talking about the way she’s pampering her partner than their rigorous fitness routine.
“Everything I’m doing right now, leading up to WEG, is just to keep Wings happy,” Karen explains. “That means lots of walks and grazing. Because keeping him happy is the most important part of all of this.” 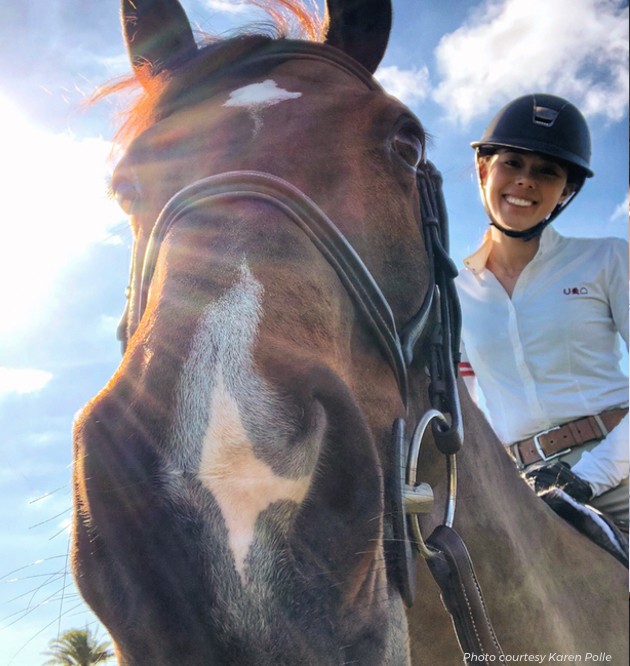 If you don’t know Karen Polle by name just yet, just wait. The world is certainly about to.
Karen was born in Japan but grew up in New York City. She began riding as a kid, a typical horse-crazy young girl who oogled at the ponies and farms on the side of the road on the way to her family’s countryside estate in New Jersey. The first time her parents brought her to a farm for a riding lesson, she was hooked.
“I think I wore jeans and rain boots for that first lesson. And a borrowed helmet,” she remembers.
Karen rode competitively in the equitation ring as a junior. That’s also where she began dabbling in the jumper ring. After graduating with a bachelor’s degree in economics from Yale University (where she says she “didn’t sleep at all,”) Karen decided to follow the career path she was most passionate about: horses.
“I really want to put everything I have into the jumpers and see how far I can go,” Karen describes. “I decided I was going to work as hard as I could at this.”

Like This Story? Read This Next: Why Aren’t More Women On The Podium?

That shift was instrumental, not only for her riding but her understanding of horses and horsemanship. She says she’s never felt closer to her fleet of horses, and especially Wings.

We went through some tough times. But that’s when it all started coming together. I was so proud.

Karen said she knew she made the right choice for her career in 2017,  when she and Wings won both the grand prix qualifier class and the grand prix final in the same five-star week at the Winter Equestrian Festival.
“It’s really hard to win any class, but to win the two biggest in a five-star week was incredible,” she says. “It’s a lot of hard work that leads up to that kind of moment. It was seven years in the making for us, at that point.” 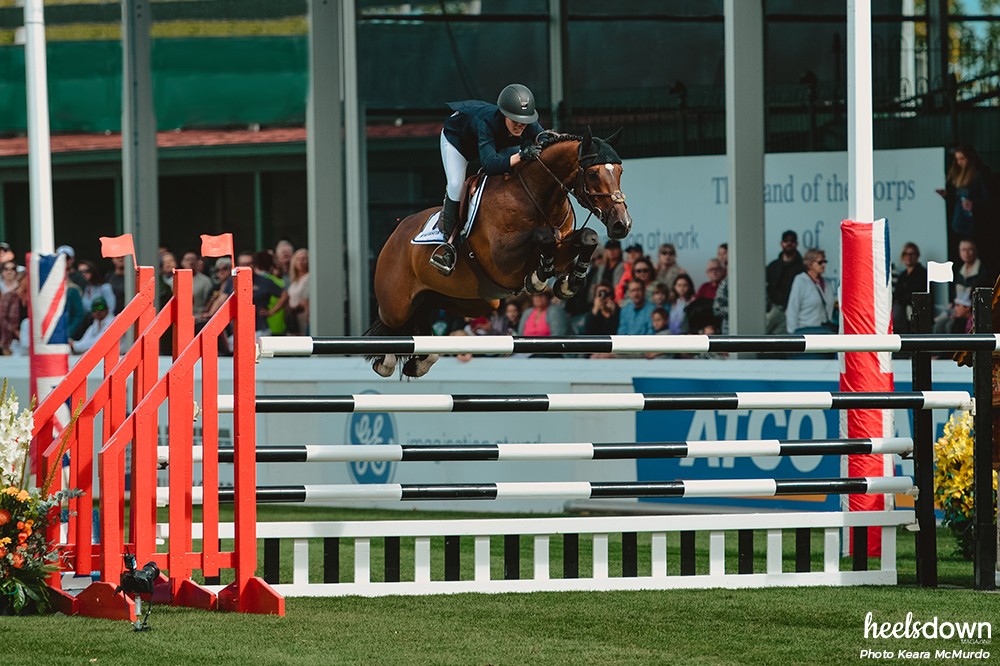 Leading up to that win, Karen is reminded of the ups and downs it took to get there. She’s had some help along the way, training with top pros like Scott Brash, Paul Schockemöhle,Mario Deslauriers, Ian Millar, Todd Minikus and Rodrigo Pessoa over the years. She currently trains with WEG 2014 show jumping champion Jeroen Dubbeldam in Holland.
“We had a lot of ups and downs. Wings has so much personality. We went through some tough times. But that’s when it all started coming together. I was so proud,” she explains.

It’s an exciting time to be part of a team sport representing Japan, Karen says, leading up to the 2020 Olympic Games in Tokyo. The show jumping team, which is riding high after a silver medal finish at the Asian Games this year, is receiving a lot of support and hype from their country in anticipation of WEG.
“Japan is definitely trying to make a push in all of its sports, including horses, before Tokyo,” Karen says. “Japan won team gold in eventing and dressage at the Asian Games too, so there’s a lot of momentum. It’s showing that we’re getting stronger.” 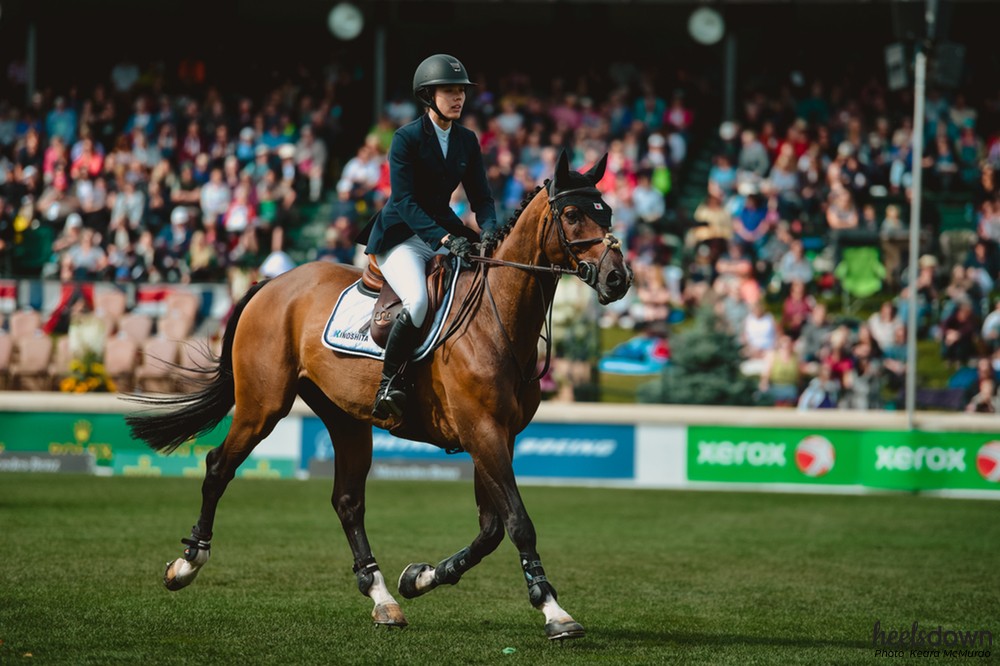 Karen has family still in Japan, and has visited riding clubs on return trips to the country. She says she’s excited to be representing the country at this time, when the sport is growing in this part of the world.
“We see more and more different countries coming into the sport, and more people in each country joining it, which is amazing,” she says. “In Asia in general, I think it’s just a matter of raising awareness. In Japan in particular, horse racing is a huge sport. There’s a lot of interest. So it’s just getting those people to try show jumping. It’s such a fun sport to get behind, that once people see it, I think they’ll love it too.”